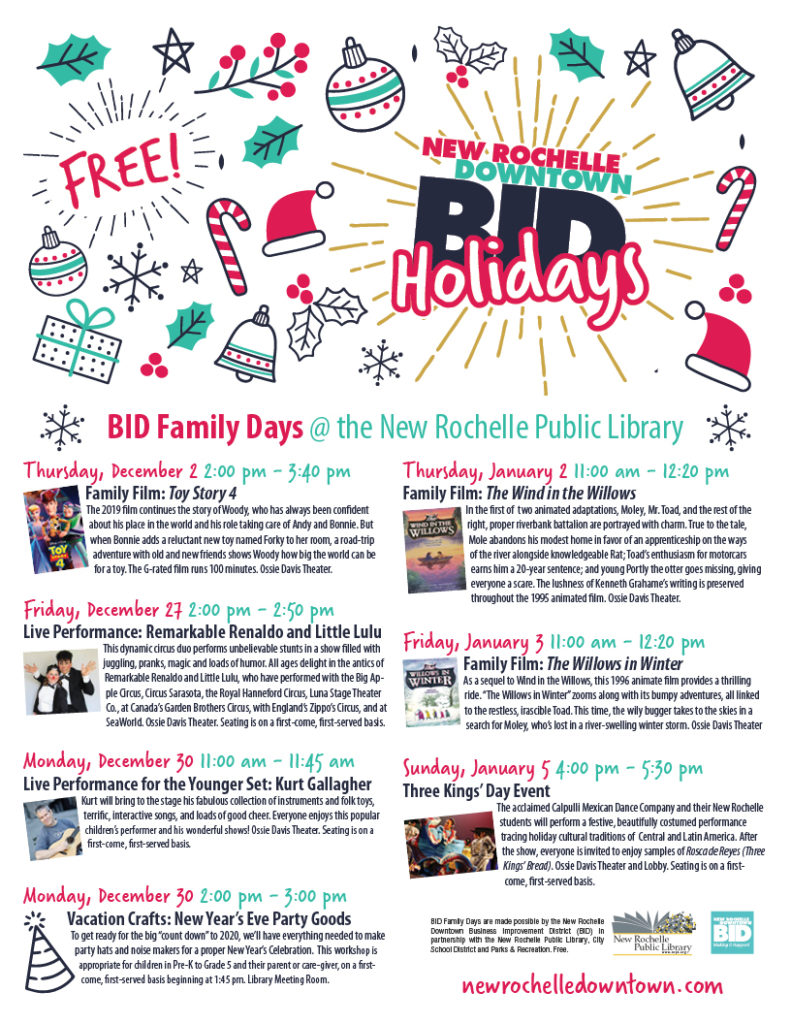 The 20019 film continues the story of Woody, who has always been confident about his place in the world and his role taking care of Andy and Bonnie. But when Bonnie adds a reluctant new toy named Forky to her room, a road-trip adventure with old and new friends shows Woody how big the world can be for a toy. The G-rated film runs 100 minutes. Ossie Davis Theater.

This dynamic circus duo performs unbelievable stunts in a show filled with juggling, pranks, magic and loads of humor. All ages delight in the antics of Remarkable Renaldo and Little Lulu, who have performed with the Big Apple Circus, Circus Sarasota, the Royal Hanneford Circus, Luna Stage Theater Co., at Canada’s Garden Brothers Circus, with England’s Zippo’s Circus, and at SeaWorld. Ossie Davis Theater. Seating is on a first-come, first-served basis.

Kurt will bring to the stage his fabulous collection of instruments and folk toys, terrific, interactive songs, and loads of good cheer. Everyone enjoys this popular children’s performer and his wonderful shows! Ossie Davis Theater. Seating is on a first-come, first-served basis.

To get ready for the big “count down” to 2020, we’ll have everything needed to make party hats and noise makers for a proper New Year’s Celebration.  This workshop is appropriate for children in Pre-K to Grade 5 and their parent or care-giver, on a first-come, first-served basis beginning at 1:45 pm. Library Meeting Room.

In the first of  two animated adaptations, Moley, Mr. Toad, and the rest of the right, proper riverbank battalion are portrayed with charm. True to the tale, Mole abandons his modest home in favor of an apprenticeship on the ways of the river alongside knowledgeable Rat; Toad’s enthusiasm for motorcars earns him a 20-year sentence; and young Portly the otter goes missing, giving everyone a scare. The lushness of Kenneth Grahame’s writing is preserved throughout the 1995 animated film. Ossie Davis Theater.

As a sequel to Wind in the Willows, this 1996 animate film provides a thrilling ride. “The Willows in Winter” zooms along with its bumpy adventures, all linked to the restless, irascible Toad. This time, the wily bugger takes to the skies in a search for Moley, who’s lost in a river-swelling winter storm. Ossie Davis Theater

The acclaimed Calpulli Mexican Dance Company and their New Rochelle students will perform a festive, beautifully costumed performance tracing holiday cultural traditions of  Central and Latin America. After the show, everyone is invited to enjoy samples of Rosca de Reyes (Three Kings’ Bread). Ossie Davis Theater and Lobby. Free. Seating is on a first-come, first-served basis.