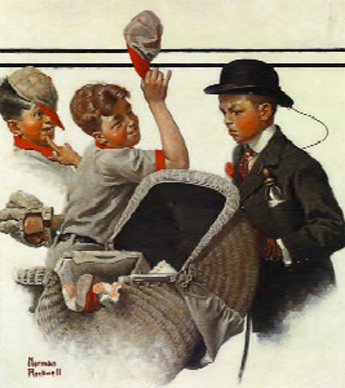 Born in Manhattan in 1894, Rockwell spent his childhood in a variety of boarding houses in the New York area, including Mamaroneck. By the age of 17 Rockwell had illustrated his first children’s book, Tell Me Why Stories. The same year his family moved to Brown Lodge, at 39 Prospect Street, New Rochelle.

The family’s new community was the consummate location for the budding illustrator. New Rochelle was, at the time, home to many of the country’s leading illustrators who supplied the essential covers for the popular magazines of the day. He would live and work in New Rochelle for the next 25 years, in various homes and studios from the south end of the town to the north.

Rockwell achieved tremendous popularity during his New Rochelle years. His detailed renderings affectionately captured typical, homespun America and its people which struck a might chord that resounded across the country. Not only did he become one of the best-known illustrators of the day—he was also a familiar and beloved figure around New Rochelle. With great admiration for his friends and neighbors, Rockwell was forever scouring the city for ideas, models and props to compose his pictorial vignettes.

“Some of my happiest years were spent in New Rochelle,” Rockwell told a Standard Star reporter when he returned to New Rochelle for a visit in 1972. He died six years later, on November 9, 1978, at the age of 84.