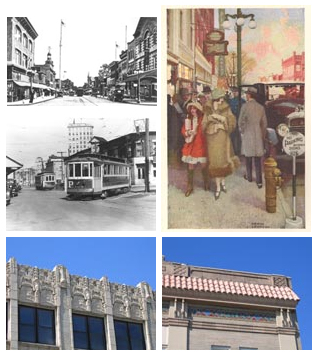 Case in point: Main Street, New Rochelle. This business area has its beginnings as early as the community’s Huguenot settlement of late 1600s and early 1700s.

By the 1920s, New Rochelle was one of the most sought-after suburban communities for home-buyers. Main Street quickly transformed to accommodate the discerning tastes of the community’s ever-growing neighborhoods. Along the street that had been lined with wood-frame buildings, “modern” structures rose. Designed and built by the most prominent architects and builders of the day, they reflected a host of elements true to the glamorous Art Deco style of the day and were constructed with the best materials and standards, with great attention to detail. Downtown New Rochelle was well-posed for the city’s glory years during the 1930s – when New Rochelle’s population had mushroomed to 54,000 inhabitants (in just three decades) and the city was considered
“the wealthiest per capita” in New York State; the “third wealthiest per capita” in the country.

Much of the Art Deco detailing has survived the years. Certain family-owned businesses, too, have weathered the tides of change. For decades, the hallmark of these stores has also been attention to detail – a continuous offering of polished service and solid value.