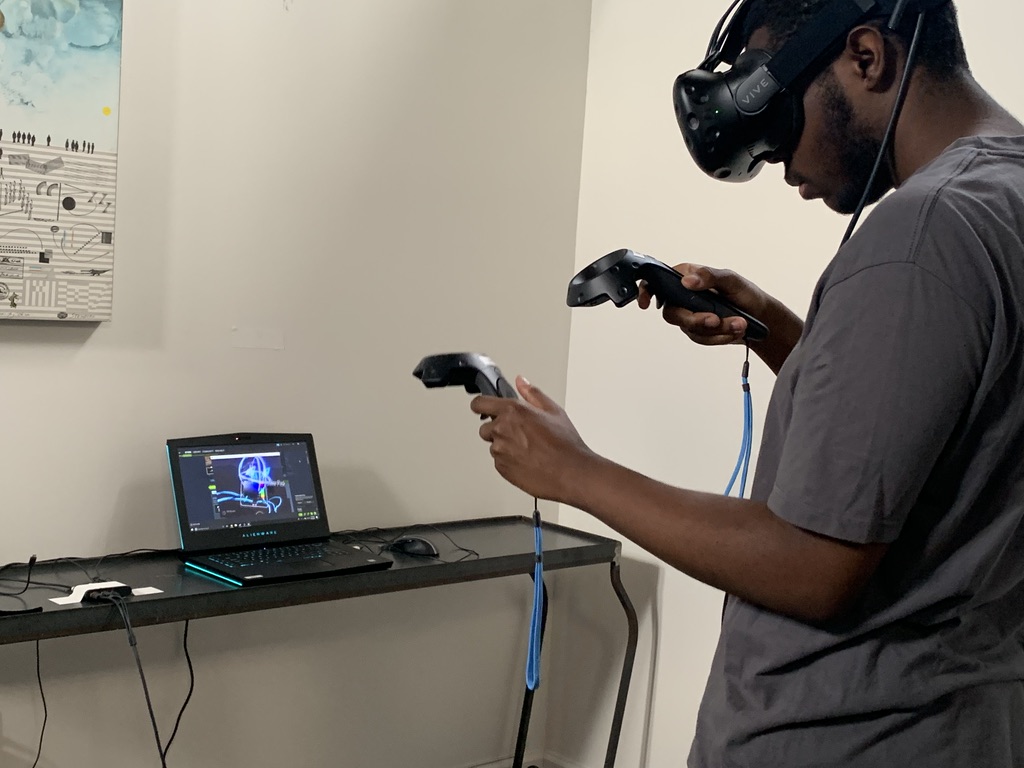 Students from our middle schools and high school participated in two VR workshops organized and sponsored by the New Rochelle Downtown BID at IDEA Lab, hosted by artists Christopher Logan and Tony Patrick. In both sessions, students created their own virtual world using VR equipment and Google’s Tilt Brush, a software which allows each student to draw freely while navigating in VR space.

Students began creating preliminary drawings in their traditional sketchbooks, then equipped with VR technology. Before engaging in active drawing in a virtual world, students chose an environment and created within that environment using Tilt Brush.

Some environments came with pre-existing elements such as a planet in a galaxy or a snowman in a snow field. There were brush options and special effects features to choose from. There is no lag between motion and drawing in VR. Students can walk around their creation, teleport to different areas, and even get inside of their work!

There were a myriad of approaches to the medium from all students who participated in the VR workshops. Some students gravitated toward the floor and some reached high for the stars! Some handled the medium very painterly or sculpturally, and others sketched in VR.

Emma: was the first to experience VR in the group and graciously helped others with their VR experience and demonstrated an abstract approach to the medium.

Quentin: who demonstrated the teleport feature for the group, put on the VR equipment intending on recreating the subject matter from his traditional sketchbook. Once he immersed himself in the VR experience, he began to edit a new world!

Katy: sculpted a head of a cartoon character in VR, inspired by her traditional sketchbook drawings.

Sydney: reached above and below her work using several values of colors.

Roy: actively created a world that combined a fire breathing dragon that coexisted with the artist’s own unique character drawings.

Michaela: re-created her original characters from her traditional sketchbook in VR space.

Josh: used the medium in more of an experiential way.

Their post experience reaction was that it exceeded their expectations. When students were asked about their change in perception of art due to their VR experiences, some responses were as follows:

Josh: stated that it was revolutionary in that one can actually walk through and around one’s art and others can experience your world. He cannot wait to use it for gaming.

Sydney: experienced the work at a different perspective from traditional drawing.

Katy: responded that one can see their work in 3 dimensions and expressed that VR makes you think differently about creating art.

Participating in the workshop sessions at the IDEA Lab was a wonderfully, engaging experience for the students who attend the City School District of New Rochelle. Creating art in a virtual world sparked the interest of our students and has opened them up to the possibility of many career opportunities in computer science.

In addition to creating in a VR world, one can create with others in that world. Work can be recorded creating a full video from start to finish, create still photos, and print out their work from a 3D printer!

Interdisciplinary uses for VR in content areas such as an astronomy class, dance, sculpture, film or an illustration class, can be established. It is an interesting concept to have a VR club where all students can have access and participate in the VR experience! Having students participate in creating an interactive VR mural through an app is an interesting concept as well. The possibility of having a VR lab accessible to the students who attend our district’s schools is fascinating!

It would behoove our district to adapt VR to our curriculum. We are very grateful that our students have had the opportunity and access to experience virtual reality at the IDEA Lab!