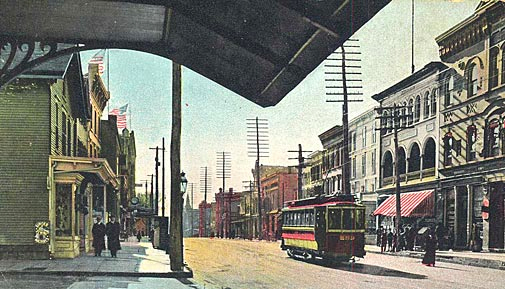 History of the Building

This brick building replaced an earlier one that had been destroyed by fire on January 27, 1897. Just 10 months later, William Weisskpof had completed a new, bigger and better building for his “resort” enterprise—an entertainment center in the heart of New Rochelle’s downtown. It was designed by architect E. H. Sturin. “The Arcade” was Weisskopf’s popular destination that included eateries, hotel rooms, a billiard hall, meeting spaces, and a few shops. “The finest arranged gymnasium within many miles of New York City,” a local paper touted, the gym also included “lockers, “shower baths”, and a gallery above “for music or spectators as desired.” The basement contained four bowling alleys and the roof featured a garden with a “bower of green foliage with many colored electric lights.” The article in The New Rochelle Press (10/2/1897) also made note that the arcade balcony (with three arched windows) overlooked Main Street.

The New Rochelle chapter of the YMCA made its first home here in 1899, renting space and the (ideal!) facilities as they built up their membership and funds to move into their own new, big and well-equipped quarters at the corner of Burling Lane. The Arcade became The Star Department Store, owned and operated by Hyman and Joseph Ginsburg until 1924. In that decade, Engel Harry, Inc. Ladies’ Wear and Sterling Furniture Store followed. Over the course of the 1930s, the building housed Patchen Brothers Women’s Wear, The Hat Box, and New Rochelle Photo Studio. In the 1940s the Photo Studio remained, and Sach’s Dress Shop and The Hat Box Milliners became additional tenants. Later, the French Boot Shop, Barricini Candy, and Dodd’s Bakery. In 1992 the Curtain Shop moved to the building from its first location at 501–503 Main Street.

The Arcade Building was one of a five buildings in the New Rochelle Business Improvement District Model Development Block project that took place in 2007–2009.  The project required a high degree of  community, public and institutional  involvement, which was  orchestrated by the New Rochelle Business Improvement District (the BID) with support of  the Community Preservation Corporation (CPC), working closely with  the State Historic Preservation Office (SHPO), Susan Doban Architects, PC of Brooklyn, and Polonia Development and Preservation Services of Queens, but also with a dedicated group of building owners, many of whom earn their livelihood through commercial business conducted in these building and are new to restoration and commercial development. The BID provided $250,000 in matching grants to the combined group of four building owners working on five buildings.

A cracked stucco covering put up in the 1960s had unfortunately concealed, yet, ironically enough, protected the true beauty of the buff brick and terracotta classically detailed façade at 541 Main Street, home to the Curtain Shop and General Store. The building has been transformed from an eyesore and a hazard (due to delaminated stucco over a major pedestrian thoroughfare) into a beautiful turn-of-the century stone and terracotta jewel along Main Street featuring two floors of arched windows. The original terracotta medallions indicating the name and date of the building were revealed and enhanced. Wherever possible, a sustainable approach was taken, in that the original materials were kept and preserved rather than replicated. The original wood window frames were kept on the third floor and restored in place and reglazed.

The building became a New Rochelle Heritage Award site in 2009.