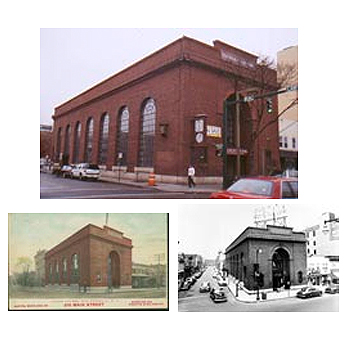 “Banks are symbols of power, money, security and conservatism: their image, therefore, can be expected to be strong in terms of design. In the late nineteenth and early twentieth centuries, when many Unite States banking institutions got their start, they were more locally oriented than at present…they were usually single-unit enterprises created by local individuals. As such, the bank buildings were indicators of civic pride. It is not surprising to find, therefore, that banks along with churches were located on prominent sites.” American Architecture: Westchester County, New York, by Frank Sanchis.

A perfect example of such a bank building, located at 491 Main Street, New Rochelle, has been continuously used for bank purposes since its construction in 1906.

The National City Bank of New Rochelle was established in 1899, in conjunction with New Rochelle’s incorporation as a city. Herman Henneberger was its first president, Charles S. McClellen was vice president, and George F. Flandreau was cashier. In 1901 Henry M. Lester became president, and the next year the bank became the community’s first national bank. Construction for the building at Main Street and Lawton Street began in 1906. Like other banking concerns of the early 20th century, the National City Bank was housed in one building, in a prominent location. Also following the trend of the period, its first construction was of impressive design, lending to civic pride and a sense of confidence.

For their grand home, the administrators of the National City Bank employed Henry Bacon (1866-1924), one of the country’s leading architects who went on to design the Lincoln Memorial in Washington, D.C., in 1923.
As a young man, Bacon had been the recipient of the A.I.A.-sponsored Rotch Traveling Scholarship, which allowed him two years of travel and study in Europe. He worked for the prestigious firm of McKim, Mead and White for six years, and began his own office in 1902. The National City Bank of New Rochelle has been cited as one of his most important commissions.

The bank is a somewhat monolithic masonry block with a large round-arched recess centered on the façade, which includes the main entrance to the building, incorporating a multi-light Neo-Classical revival-style transom and contemporary anodized aluminum door assembly. The arch is trimmed with terra cotta. A cornice of brick extends around the building, with a parapet gable above and a rectangular pediment centered on the façade. The side wall was originally punctuated by five bays, each of which contains a tall round-arched void with a multi-light window unit; two additional bays and matching windows were added when a commercial building was removed at the rear.