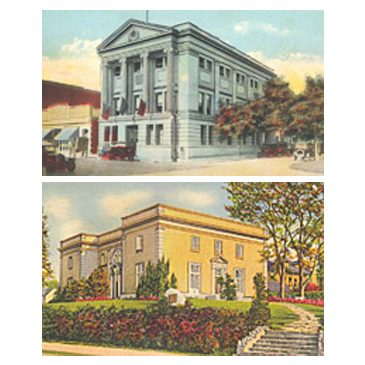 The local chapter of the Fraternal Order of Masons was making a clear statement when it constructed this imposing building at the turn of the 20th century. Located in the heart of the community’s rapidly growing business district, the structure was designed to be one of the largest in the downtown, and the most monumental. The Huguenot Lodge No. 46 of the Free and Accepted Masons was formed in 1888, but grew from the Westchester Lodge, F. & A.M., which was begun in 1796. The Huguenot Lodge members met in private homes until money was raised to erect the downtown building, which was dedicated November 19, 1901.

The first and immediate tenant was the New Rochelle Library. Moving out of their small quarters in the New Rochelle Trust Company building at 40 Centre Avenue (no longer standing), the trustees leased two floors of the new Masonic Temple, as it was called. In addition to stacks of books, the Masonic building allowed the library to offer a large reading room, a reference room and a special space for children’s books and programs. As the community grew in leaps and bounds during this decade, so did the library needs of the community. In 1910 the city joined many other municipalities across the country in requesting a new library from Andrew Carnegie . Four years after New Rochelle’s application was approved, the library moved out of the Masonic Temple and into its magnificent “first” (stand-alone) library building on Main Street and Pintard Avenue.

In 1938 the Huguenot Lodge, with 496 members, was one of three Mason Lodges (chapters) in New Rochelle. During World War II the building was utilized for a unique and profound project initiated by the many nationally recognized New Rochelle artists. Now referred to as the World War II Portraits Project , the endeavor ultimately captured the images of over 10,000 service personnel.

About the architect:
The architect of the Masonic Lodge, (now 451-453 Main Street) was George Kramer Thompson (1859 – 1935), a Dubuque, Iowa native who came to New York City in 1879 and studied under prominent New Yorker Frederick H. Withers. Thompson was in private practice in the City from 1883 – 1916, including a partnership with Francis H. Kimball, d/b/a Thompson & Kimball. Their commissions include the Manhattan Life Insurance Building (1892) , the Empire Building (1898) , the Standard Oil Building, and the Trust Company of America Building .

About the architecture:
The imposing Neo-Classical Revival-style building is a rectangular block form with a pedimented limestone façade, with an Ionic portico set upon a raised basement of rusticated stone and trimmed with an oculus in the pediment. The façade is divided into three bays: side elevation into five bays, separated by simple pilasters.

Of interest:
One of the country’s foremost architectural critics panned this building in 1909 – and he did so in the April 1909 issue of the Architectural Record, in an article entitled “Study of a New York Suburb, New Rochelle”. Although the 13-page article was written by “anonymous”, it was soon disclosed that Montgomery Schuyler was its author. Interestingly, he was a resident of the New York Suburb, New Rochelle at the time, and for several years after.