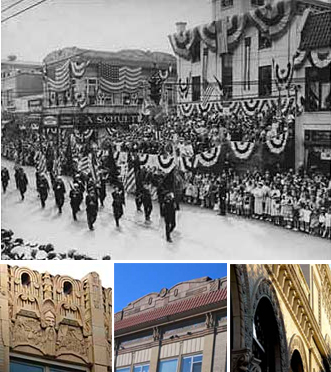 What does 519 Main Street, at the prominent corner of Main Street and Memorial Plaza, have in common with the 81 Centre Artist Studios, Talner’s Jewelry, the Curtain Shop and the “Palace” buildings? Just look up.

They all boast fine architectural terra cotta details. Look up, and you’ll see an abundance of the glazed ceramics – some molded into fanciful shapes of faces, fruits and seashells; others finished with vibrant colors. These architectural details are hallmarks of the late 1800s – 1930s, when Art Deco reigned along America’s most fashionable Main Streets. Of any community in Westchester, New Rochelle’s downtown is considered to have the most contiguous group of buildings representing this period. Downtown artist and owner of downtown’s Backstreet Gallery, Ivar Hyden, memorialized these terra cotta treasures in a series of striking photographs.

Another thing 519 Main Street will soon have in common with these other important downtown historic landmarks, is that like these other buildings it will be restored through the BID Facade Renovation Program. The BID Facade Renovation Program, which has been recognized for excellence in historic preservation by the Preservation League of New York State, works with private property owners to restore and rehabilitate downtown building facades. To help with these renovations the BID has won matching grants from the New York State Main Street Program and also works closely with the New Rochelle Signage and Awnings Program.

According to City Historian Barbara Davis (author of “Images of America: New Rochelle” available for sale at the Curtain Shop ), 519 Main Street, constructed in 1925, has a Spanish Mediterranean feel, with a clay-tiled roof and stylized bracketry, yet also displays an Egyptian influence. Between the brackets that support the red clay tiles, there is a frieze of glazed-clay tiles in a geometric pattern in four segments, corresponding to the division of the first floor office below. On the upper part of the building the parapet has a central, round shield and long, curving wings extending out to the corners of the façade. This is the sole New Rochelle example of “Tutomania,” which resulted after the tomb of Tutankhamun was discovered in 1922. The design of Ancient Egypt became one of the major influences on the Art Deco style in architecture, jewelry and furniture.

BID Director Ralph DiBart noted, “The BID is thrilled with the growing number of historic buildings that have been restored through our Facade Improvement Program. Downtown’s unique character is reflected in these architectural treasures. We look forward to the historic restoration of other downtown buildings and storefronts this year.”

Building owner Louis Miele stated: “I love New Rochelle’s history and am happy to be a part of our ongoing downtown renaissance. It is important that we continue to restore important historic buildings such as 519 Main Street while we also bring in new development, residents, and businesses. Our present is enriched by combining the old with the new.”

The project design is by downtown architect Robert Stanziale and the restoration will be undertaken by Polonia Architectural Restoration which has worked on restoration projects ranging from the Morris-Jumel Mansion to the Whitney Museum.